Our Story ~ From the Founder

Having born in a leprosy colony, Sailendra contracted leprosy at the age of seven. While his parents have deformities from the disease, he was able to take multidrug therapy (MDT) soon after diagnosis. “I was lucky to be cured before deformities could affect me. In the colony where I grew up, everyone was struggling for survival. People had wounds, sometimes with maggots, and my father would dress these wounds. We had to depend on alms and I still remember picking through them, trying to find candies and biscuits. Today, I am educated, independent, and earn sufficient income for my family, but a successful life for myself is joyless when the family and community that raised me are so vulnerable. In 2004, I decided to do whatever I could, to help. I gathered youth from a number of leprosy colonies and together we collected 1 rupee per family per day for colony development. In a year, we raised 150,000 rupees from 20 colonies. This success boosted everyone’s morale, and raised hopes for change. Our state was recognized as the first in India to have a group of youth leaders comprising persons affected by leprosy. Later, in 2009, the organization Atma Swabhiman (Self Dignity) was established for and by the persons affected by leprosy.

To end discrimination, we need public participation of persons affected by leprosy throughout society; sensitization, education, and awareness-raising at the grassroot levels. Equally important is to address and overcome the self-stigma and paranoia prevalent in the minds of persons affected by leprosy. Internalized consequences of discrimination are not given enough attention.

My motto in life is to serve humanity by promoting a life of dignity and inclusion of leprosy affected people in mainstream society. Love, affection, trust and support of the fellow affected and generous responses and support from friends, family and well-wishers motivate me to keep going. Every step forward fills me with hope that we will achieve our goals.” 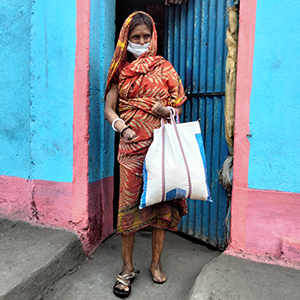 Get involved today, to help individuals move beyond leprosy towards a life of dignity and inclusion!